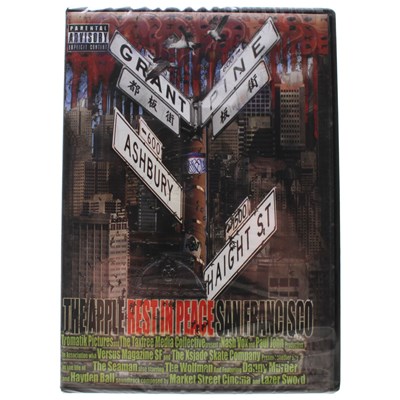 Its DOOMSDAY September 11, 2008 and after returning home from "over the lake" Mr. Sea finds himself engulfed in his dirty old habits once again. He starts to fell like the city is dragging him down and decides that after a glorious 10 years of mischief, magic and mayhem in the Golden City its time to move on. But not before one last kiss goodbye... Join the Seaman and his ace Wolfman as they strategically rip and terrorize their own home territory in this action packed thrill ride around the streets of San Francisco. Starring: The Seaman and The Wolfman Featuring: Danny Murder and Hayden Ball The Apple Rest In Peace San Francisco is the newest DVD from long time producer Sean Cullen. Featured skaters Kevin Yee, Danny Malm, Hayden Ball, and Sean Sea himself have no problem stepping outside of the norm, not only in regards to trick selection, but the obstacles skated as well. Featuring some of the more rugged spots throughout San Francisco and other surrounding cities, The Apple will leave you wondering multiple times, why/how would you skate that. If you are a fan of Cullen's earlier works, or you merely want a break from the standard skate video format, The Apple will not disappoint.